Home/Necromunda: Book of the Outcast 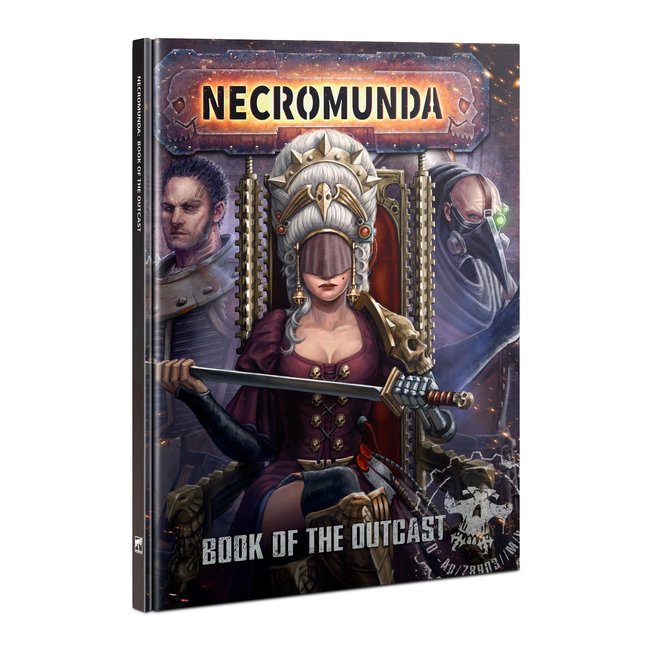 Outcasts of Necromunda: Extensive background information on outcasts gangs, covering aspects such as the badzones, the scum that comprise an Underhive Outcasts gang, and why such maligned members of the underhive would be inclined to sign up Read more..

– Outcasts of Necromunda: Extensive background information on outcasts gangs, covering aspects such as the badzones, the scum that comprise an Underhive Outcasts gang, and why such maligned members of the underhive would be inclined to sign up
– Assembling the Outcasts: Includes all the rules you need to know in order to field an outcasts gang in skirmish and narrative games of Necromunda, including gang composition, weapons and wargear, and additional rules for creating your own charismatic Leader with a personality all their own
– Hangers-On and Brutes: Includes rules for hiring Hangers-on and Brutes, for both skirmish and narratives games
– Outlander Terrain: All the terrain rules needed to establish a stronghold for Necromunda gangs, usable with the included Outlander Campaign or any game of Necromunda, as well as rules for fighting across Underhive Markets, Walls and Gates, Watchtowers, and Gunk Tanks
– Wyrd Powers: Light up the underhive with rules for Wyrd Powers and Force Weapons that can be used by any gang that includes a Non-sanctioned or Sanctioned Psyker, including seven Wyrd Power disciplines: Biomancy, Chronomancy, Divination, Pyromancy, Technomancy, Telepathy, and Telekinesis
– Outlander Campaigns: Embark on a narrative campaign to build and grow a settlement while defending and denying resources from your rivals, and assume the role of an Arbitrator keeping the campaign on an even keel while players work through three real-time phases training recruits, gathering resources, and recovering from the wear and tear of underhive combat
– Outlander Scenarios: Rules for six new outcasts-themed scenarios – Settlement Raid, Market Mayhem, Stealth Attack, Gunk Tank, Mining Expedition and The Big Score – each including rules for playing the battle, rewards gained for victory, experience, reputation, and special rules for these scenarios
– Showcase: A full-colour section spotlighting miniatures, battle scenes, and alternative outcasts colour schemes
– Outcasts Gang Tactics: Eighteen new Gang Tactics for use in games, plus rules and background for Lady Credo, Rebel Lord – a unique Rebel Lord who can be chosen as an Underhive Outcasts Leader at gang creation
– Trading Post: Weapons, armour, and equipment available to Underhive Outcasts gangs, who must rely on whatever they can find and barter for without the backing of the major Houses
– A Weapon Reference Chart containing a comprehensive weapons reference chart for all weapons and wargear available on the Trading Post for outcasts gangs
– Dramatis Personae: Includes rules for hiring and using three brand-new Dramatis Personae in your games of Necromunda

This is an expansion to Necromunda – you'll need a copy of the Necromunda Rulebook to use the contents of this book.

Outcasts of Necromunda: Extensive background information on outcasts gangs, covering aspects such as..