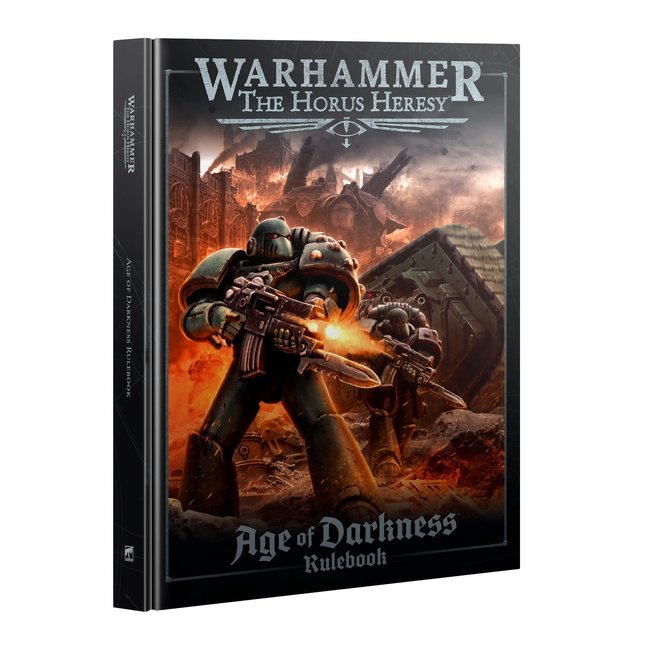 The book opens with a full exploration of the galaxy in which the wars of the Horus Heresy are fought. Read more..

AGE OF DARKNESS
The book opens with a full exploration of the galaxy in which the wars of the Horus Heresy are fought – from its dark past to its shining peak – and the technologies, factions, armies, and ideals that came to dominate it.

– The Age of the Emperor: An overview of humanity's fall and the Imperium's rise. You’ll learn about the Age of Strife from which the Emperor arose, the Great Crusade he began to unite the galaxy under his banner, and some of the most important groups he founded or aligned himself with to support this epic undertaking.

– The Imperium of Mankind: A closer look at the structure of the Imperium at the advent of the Horus Heresy. You’ll learn about some of the most important events, people, and groups that dominated humanity's destiny. This section also explains the significance of the Warp, psykers, and the Imperial Truth – the strict, rationalist philosophy the Emperor imposed on his conquests.

– The Legiones Astartes: The Space Marines are far more than just an army. They’re genetically modified, equipped with the finest wargear, and psycho-indoctrinated in a rigorous and brutal process that creates ideal weapons of war. This massive, in-depth section explains just what goes into creating a Space Marine, illustrates the various types of weapons and power armour employed by the Legions, and provides a dedicated look at each of the 18 Space Marine Legions, including information on their distinctive history, tactics, organisation, and the mighty Primarchs that lead them – as well as a visual guide to their heraldry and colour schemes.

– Additional Factions: Despite being primarily a war between the Legiones Astartes, many other armies are involved in the Horus Heresy, including the Talons of the Emperor, the Solar Auxilia, and Mechanicum. This section explains the roles these groups played in the Imperium – and its downfall – including their histories, favoured tactics, and military structures.

– An Age of Darkness: At the dawn of the 31st Millennium, the Emperor's favoured son plunged the galaxy into darkness. This section delves into the opening acts of the Horus Heresy, setting the stage for the most devastating war in human history. It includes a summary of the brutal events of the Isstvan Drop Site Massacre, the advances made by the Traitor war machine, and the emergence of the cosmic Ruinstorm, from which daemonic entities spill into reality.

– Pivotal Events of the Horus Heresy: An in-depth timeline of major conflicts and engagements within the Horus Heresy itself, leading up to the final Siege of Terra. This section offers crucial insight into where the Legions are, who they're fighting, and what terrible grudges are being formed at various stages of the war.

PLAYING THE GAME
You'll then learn how to play Warhammer: the Horus Heresy on the tabletop, with all the core rules you'll need to make full use of its supplements.

– Core Rules: You’ll learn about the general principles of the game, its turns and phases, how to command your units, measure distances, shoot at enemies, and charge into melee. You’ll also learn about Reactions, which allow each player to respond to unfolding events even when it's not their turn.

– Unit Types: The Age of Darkness is dominated by mighty heroes and terrifying war machines. This section explains how to use distinct unit types, such as Characters, Vehicles, and Automata, as well as the unnatural Psychic Powers that can be wielded in battle.

– Terrain: The galaxy is littered with exotic and dangerous battlefields. This section provides rules for using different kinds of terrain on your tabletop, including Barricades, Jungles, and Ruins, as well as how to claim Fortifications and use a variety of Buildings.

– Special Rules: The battles of the Horus Heresy encompass a huge variety of soldiers and equipment, each with their own unique qualities. This section offers a centralised roster of all the universal special rules that govern different units and weapons, from cunning Scouts to explosive Blast weapons.

GAMING IN THE AGE OF DARKNESS
This final section provides an overview of the Warhammer: The Horus Heresy hobby, whether setting up games or building an army of your own.

– Showcase: The book includes a photographic showcase of seven stunning Legiones Astartes armies from different hobbyists, including commentary on how they chose to collect, build, and paint that faction. It also offers four battlefield showcases, demonstrating the cinematic ways you can recreate the settings of the Age of Darkness.

– Modes of Play: Different hobbyists enjoy different kinds of gameplay. This section breaks down the various ways to play your games, including the broad categories of Narrative Play, Matched Play, and Open Play, as well as Campaigns and even team games.

– Preparing for Battle: This section explains how to start (and finish) a game, including Force Organisation Charts for assembling your army list, a guide to setting up your table and deploying your armies, a variety of victory conditions, and six missions and six deployment maps to combine for standard games.

– Reference & Index: The book closes out with a reference section, with quick-and-simple rules summaries to help your games run smoothly, and a lengthy index to make looking up specific rules much easier.

The book opens with a full exploration of the galaxy in which the wars of the Horus Heresy are fough..