Home/Smash Up: It's Your Fault! 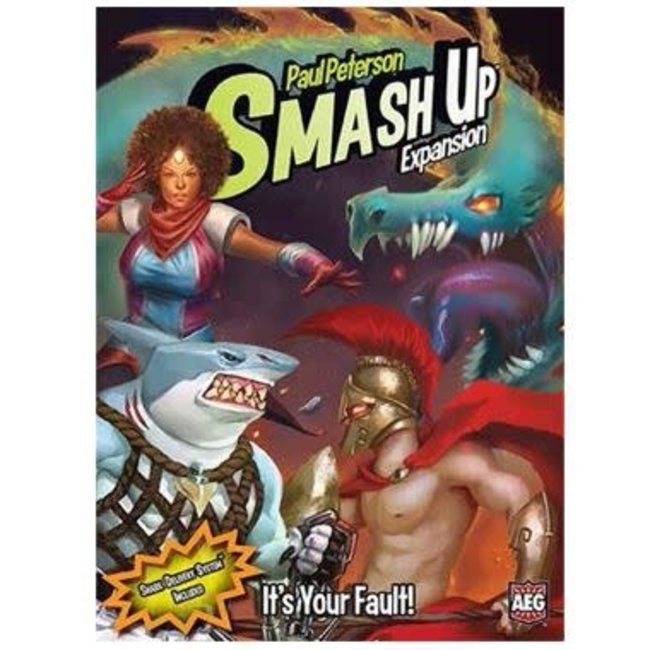 We asked for your help and this is what you get — Dragons, Mythic Greeks, Superheroes, and Sharks! Read more..

We asked for your help and this is what you get — Dragons, Mythic Greeks, Superheroes, and Sharks!

You’ve made one of the best Smash Up sets ever!  We let the fans vote and determine new factions for Smash Up, and you came through with some awesomeness. All four factions in this box were the top of thousands of nominations, and then survived a bracket vote, all to get to you today!

Smash Up: Its Your Fault includes Sharks, who plan to make chum of their opponents. Also inside you’ll find Superheroes, flying off the comics page to defeat enemies.  You chose to bring the legends of Greek Myth to the table, and finally the imposing might and destructive power of Dragons!

Dragons
Here there be Dragons! These massive monstrosities of legend have come to Smash Up, and they took smashing bases literally. They have little time for your opponent’s shenanigans, for other factions are crunchy, and taste good with ketchup.

Mythic Greeks
This is the story of a time long ago – a time of myth and legend. When ancient gods were petty and cruel, and they plagued mankind with suffering… The ancient gods and heroes of Greek myth have returned, bringing their factors and curses, heroics and bravery to your base battles!

Sharks
The most perfect killing machines. Predators that have evolved to the apex of their realm. And now they want our realm! Sharks are coming on land to show that they have what it takes to be at the top of the food chain in and out of the water. Just when you thought it was safe to go back to the convenience store…

Superheroes
Faster than a speeding bullet. More powerful than an aggromotive. Able to leap tall Nukebots in a single bound… The mighty power of the comic page comes to life!  Defeat your arch-nemesis with super strength, speed, and toughness. Then find out who wins the base in the next exciting issue!

Review Alderac Entertainment Group (AEG) Smash Up: It's Your Fault!

We asked for your help and this is what you get — Dragons, Mythi..