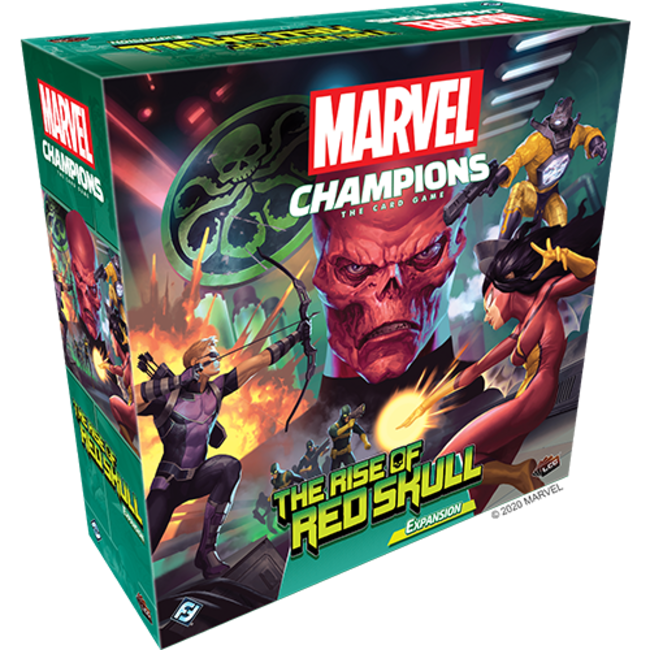 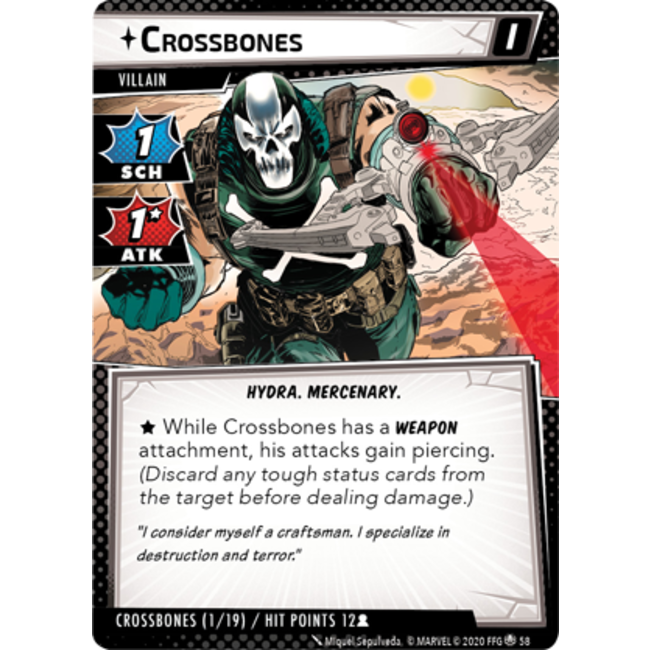 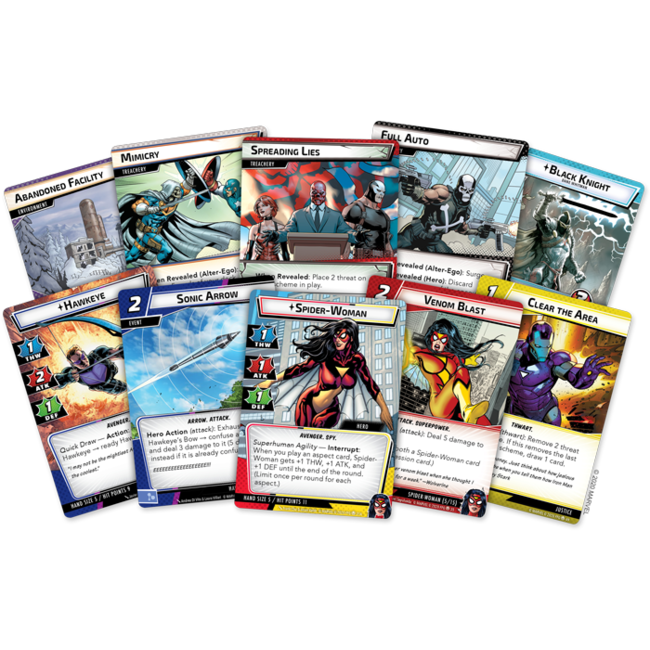 “Hail, Hydra! Immortal Hydra! We shall never be destroyed! Cut off a limb, and two more shall take its place! We serve none but the Master—as the world shall soon serve us! Hail Hydra!”
–The Hydra Oath Read more..

The nefarious organization known as Hydra has insidiously spread its tentacles through all of society, corrupting governments and subverting justice around the world. Their dark plots may begin with an unexpected attack on Project P.E.G.A.S.U.S., but you can be certain that there are tendrils running deep below the surface. Your battle against evil is only beginning…

Fantasy Flight Games is proud to announce The Rise of Red Skull, the first campaign expansion for Marvel Champions: The Card Game!

The Rise of Red Skull boasts a massive infusion of new content for your games of Marvel Champions. Hawkeye and Spider-Woman join your roster of heroes with fully pre-built and ready-to-play player decks stuffed with new cards. Whether you’re playing these new heroes or relying on old favorites, you can test their mettle against five brand-new villains: Crossbones, Absorbing Man, Taskmaster, Zola, and Red Skull. Each of these five scenarios offers a unique challenge, and while you can simply choose a villain to battle, this campaign expansion lives up to its name with the introduction of campaign mode to Marvel Champions: The Card Game.

If you’ve been eagerly waiting for more Marvel Champions scenarios, you’ll find plenty to enjoy in this campaign expansion. Every villain in this expansion has his own schemes and tactics, such as Crossbones’ obsession with Weapons. Crossbones (The Rise of Red Skull, 58) gains the new piercing keyword while he has a Weapon attachment like Crossbones' Machine Gun (The Rise of Red Skull, 64), which he can use to pile on additional damage whenever he attacks. And that’s not even mentioning the deadly experimental weapons that Crossbones can loot from attacking Project P.E.G.A.S.U.S.!

Of course, you could choose to fight Crossbones and Absorbing Man as entirely separate scenarios, connected by an overarching story, as with the Core Set scenarios. The Rise of Red Skull gives you an additional option, however, by introducing campaign mode. In campaign mode, you’ll play through all five scenarios of The Rise of Red Skull, taking down each villain in turn. In addition to being the ideal way to play through and experience Red Skull’s devious plot, campaign mode lets your choices echo throughout the campaign and gives every player the chance to upgrade their decks with certain cards they find along the way. You may even challenge yourself with the expert campaign, which introduces persistent damage between scenarios and forces you to take punishing obligations if you want to heal.

Combine campaign mode with five new villains and three Hydra-centric modular encounter sets that can be added to these scenarios or any others, and it’s plain to see that your heroes will have their work cut out for them. So it’s a good thing that two new heroes swing into action with this campaign expansion!

In his pre-built deck included in this campaign expansion, Hawkeye uses the Leadership aspect, and you’ll find a wealth of new Leadership cards for any hero to utilize, including Kate Bishop as Hawkeye (The Rise of Red Skull, 11). As long as you’re willing to discard cards from your hand, Kate can be an exceptional source of damage, especially if she teams up with a hero who has high-resource cards, such as Captain Marvel or Hulk.

Hawkeye may prefer to fight from afar, but Spider-Woman (The Rise of Red Skull, 31A) is more than willing to leap straight into action. With her superhuman agility, Spider-Woman raises all of her base stats when you first play an aspect card each round. Most heroes would be limited to raising their stats once with this ability, but as a double agent, Jessica Drew (The Rise of Red Skull, 31B) allows you to choose two aspects during deckbuilding, equally splitting your deck between them! Even aside from extra triggers of Spider-Woman’s ability, bringing two aspects together in a single deck opens the door for dozens of previously unexplored combos.

With Spider-Woman’s pre-built deck in The Rise of Red Skull, she brings together Aggression and Justice aspects, mixing maximum damage with threat removal. With her allies like Spider-Girl and Spider-Man swinging into combat to help tackle the villain and remove threat from schemes, Spider-Woman is perfectly placed to take her fights to the next level.

Hawkeye and Spider-Woman arrive on the scene within this campaign expansion, but there’s one scenario pack and four hero packs planned to follow up The Rise of Red Skull before the game’s second campaign expansion. You can catch a glimpse of what’s on the horizon in the image above!

Protection from the Villain

Announcing alongside The Rise of Red Skull campaign expansion, we’re happy to introduce three new game mats to organize your play space and protect your cards. The Red Skull 1-4 Player Game Mat offers a 3’ x 3’ play area with plenty of room for you and your fellow heroes, drawing you into the unfolding campaign with comic panel art of Red Skull and the other villains that you’ll face. Alternatively, if you’re looking to represent your new favorite hero, the Hawkeye Game Mat and Spider-Woman Game Mat each depict their hero springing into action, giving you plenty of space to set up your cards and take the fight to the villain.

“Hail, Hydra! Immortal Hydra! We shall never be destroyed! Cut off a limb, and two more shall take..