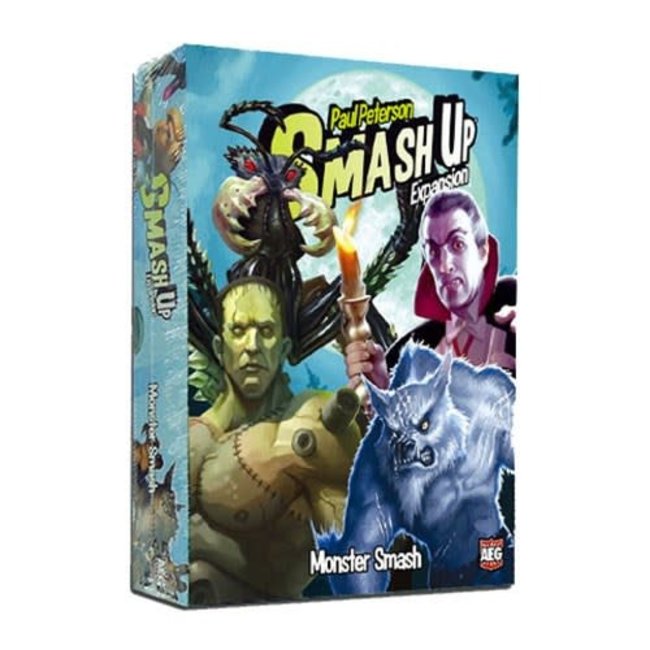 Hide under the sheets! Monsters are coming! Smash Up: Monster Smash brings all the great horrors of the screen to your game of Smash Up. Read more..

Vampires – From the dark gothic recesses of ancient brooding castles, draped in black velvet, and probably listening to Bauhaus, the children of the night come to drink deep from Smash Up! Draining the very life from their victims, these cursed souls will gain power upon destroying your opponents’ minions.

Mad Scientists – Working in the lab, late one night, my eyes beheld an eerie sight. For my monster from his slab, began to rise. And suddenly to my surprise, he did the Smash… Up. The Mad Scientists, intent on unlocking the mysteries of life, have instead released death in the form of powerful creations! Their toying with nature can empower various minions, but at what cost?
(Apologies to Bobby Pickett)

Giant Ants – The future of atomic energy was never supposed to have this disastrous effect! Mutant ants spill out from giant hills, intent on destroying our homes and all else that stands in their colony’s way! The ants work as a great hive mind, spreading their power around as necessary to ensure their atomic-age victory!

Werewolves – From howling at the moon to cowing their pack, or ripping through town, the werewolves are here to assert their place as the alphas of Smash Up. Using their explosive power to beat down opponents, the werewolves will not relent in their drive to hunt and dominate all that stand against them.

Combine these groups into teams of two for various effects! Smash Up: Monster Smash also contains 8 new Base cards to compete over.

Hide under the sheets! Monsters are coming! Smash Up: Monster Smash brings all the great horrors of ..