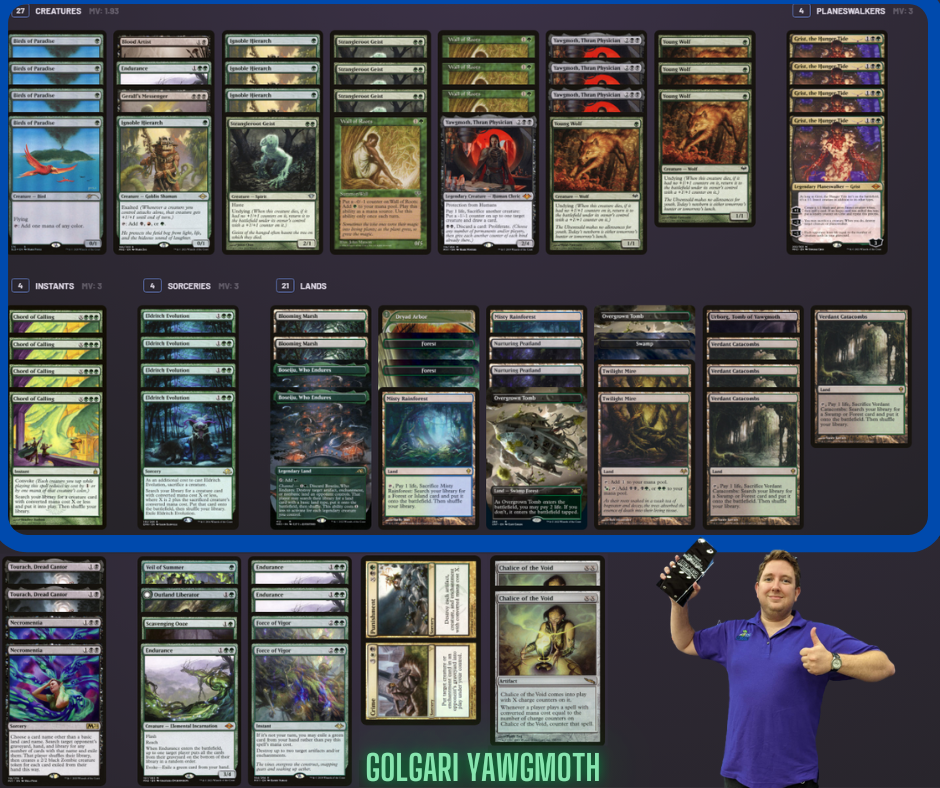 David Johnson has been a Cape Fear Games regular for seven years! When we found out that he won Star City Games' Modern 5K, we were over the moon with excitement. It's been awesome seeing his Magic career grow over the years and see it culminate in such a big win! We asked David if he would write an article for the CFG blog about his time at the Modern event. We hope that it inspires folks to take their own journey into competitive events and know that your friendly local game store always has your back. Congratulations to David and we can't wait to see how great you do at the Regional Championship Qualifiers!
-Jesslyn Wilson

On Friday, August 19th, I travelled to Baltimore, MD to compete in SCG CON’s Team Constructed 25K event with teammates Justin Cavanaugh and Joey Hall. This was the first time I would be playing Legacy in paper, having only started practicing about a month ago. We went into Saturday feeling confident, and while our performance was okay, we were not able to move on to Day 2. My record was by far the worst, ending 1-5 while we went 3-3 as a team. So, I decided to enter the Modern 5K on Sunday, with another chance to earn a qualification for the Regional Championships at Dreamhack Atlanta.

Yawgmoth had already led me to two top 8 finishes in Modern RCQs, going 5-0-1 and 5-0 in group stages. At Cape Fear Games’ Modern RCQ, I lost to Indomitable Creativity Combo in the finals, while at the Dimensions Gaming event I lost to Joey Hall playing Burn in top 4. I was comfortable with this deck, and felt decently positioned in the current Modern metagame, especially after seeing the decks that Joey played against during the team event. Sunday started, and my first game was a swift loss to Hammer Time. I then proceeded to win the next 7 rounds to finish 2nd seed in top 8, even beating Creativity Combo in Round 7 to make up for my loss during CFG’s RCQ.

The top 8 ended up being the easiest matches of the day. First round I 2-0’d Amulet Titan, with a brutal turn 1 play in game 2 where I cast Force of Vigor destroying their Urza’s Saga and Amulet of Vigor. Second round was Izzet Murktide, after winning the grindy game 1 my sideboard Endurances never allowed a Murktide to hit the table game 2. The other finalist was playing Twiddle Storm, and after the long day of Magic said he was not interested in the RC invite, so a prize negotiation was made, and he conceded. I was given the trophy, had my photo taken, and immediately left the venue to begin the 6 ½ hour drive home, making it back around 3:30a.m.

I don’t believe I would have been able to achieve this win without the help of both Justin and Joey. My losses on Saturday made me feel like I had let them down, but both were extremely supportive and helped recenter my focus for Sunday’s Modern 5K. They were just as happy as I was to see my success, and I couldn’t ask for better teammates. It’s surreal to have come so close to qualifying before, only to finally succeed at one of the largest events I’ve ever attended. Yawgmoth continues to feel like an underrated deck in the modern format. Having high familiarity with the lines available while my opponents weren’t sure of my moves led to many surprise victories. I’m ready to deep dive into metagaming for Pioneer in preparation for the Regional Championships and hope to continue to rep Cape Fear Games in the process. No matter where I travel to play Magic and any successes I have, nothing is more satisfying than sitting down with friends at my Local Game Store.