If you haven't read our first break down on The Imperium and Chaos forces, you can read about it here: https://www.capefeargamesilm.com/blogs/posts/

It was almost a full year ago. This one has been a Loooooong time coming - sorry for the long delay.

From here we go to my favorite part! Welcome to the cornucopia that is XENOS! There is so much to unpack with the remaining races, so LETS. GET. STARTED.

**WARNING. Some information may be incorrect, as this was personally compiled by one person with a lot of tabs open and the lore is rewritten from time to time by Games Workshop**

Are you thinking about Borg™ Terminators™? Cause you should be thinking about Borg Terminators. The Necrons were one of the oldest known races in the universe!... and they had incredibly short lifespan because they got SO MUCH CANCER. Their society worshipped the idea of death, and so temples were constructed to honor those who passed. Living was a bit of a bummer. After all, if you are destined to die young, death is the permanent fantastic option to appreciate right?

They eventually encountered the Old Ones, who were basically these immortal aliens so naturally the Necrons got jealous and started a war. The Necrons got their butts kicked, and could have been wiped out if the Old Ones wanted to. Eventually the Necrons encountered the C’Tan, a malevolent star eating people. Energy is super tasty for them. They too had lost to the Old Ones in wars, but told the Necrons that they could defeat their enemy together and as a bonus that they had the technology to keep the Necrons alive forever. The C’Tan are super shady. So rather than really think anything through, the Necrons did what any race would do in this scenario: Blindly trust their new “friends” and converted themselves into robots to live forever after death. 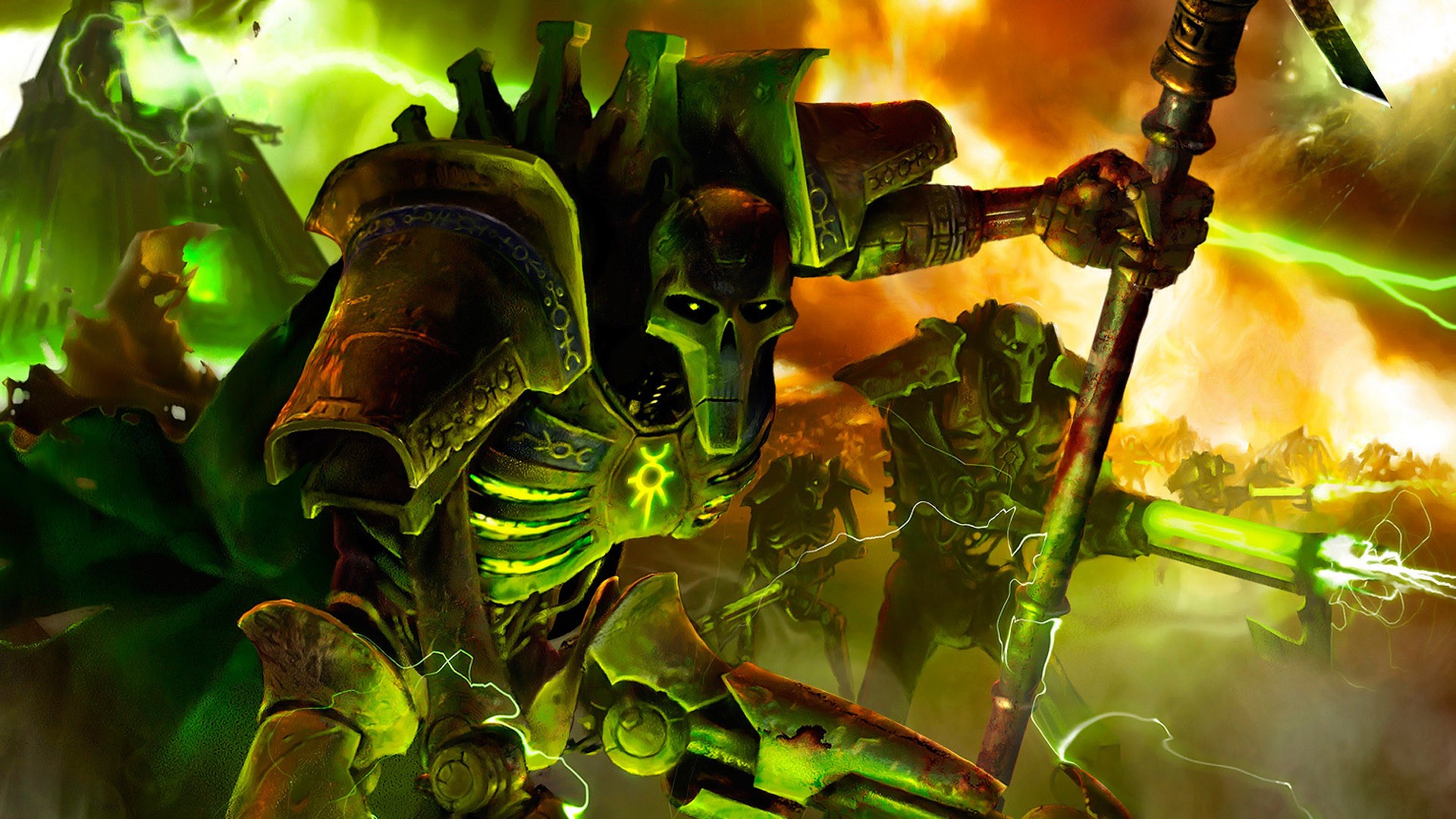 This process worked, but they soon realized that it destroyed the personalities of all but the strongest willed, and the C’Tan fed off the energy it took to convert every Necron into a robot. So like I said, big energy = tasty treat. Tricked and upset, the leader of Necrons followed the C’Tan until they defeated the Old Ones, and then turned on the C’Tan because of the trickery. Trillions died in these wars, and with their forces depleted, the leader of the Necrons commanded his forces to go into a deep slumber. The time of the Necrons would come again, and so they sleep until present day in crypts called Tomb Worlds that awaken when the wrong group of people stumble into them. They are fractured, but an incredibly powerful force not to be reckoned with. And that’s the Necrons!

Hideous, insectoid monsters from outside the galaxy. Yeah. Have fun. The Tyranids are monstrous creatures from beyond the galaxy that slowly crawl across the universe collecting more organic matter into their hive mind. They travel in gargantuan planet engines called Hive Ships. If they show up, you are already dead. They love attacking up close and personal, and will take in any and all organic matter to improve their collective. Think of the Flood from the Halo™ franchise had a baby with Star Trek’s Borg.

Other than how frightening they are, they also will attempt to convert species through subterfuge with units called Genestealers. They mimic the look of a local populace, and attempt to get them to worship the Hive Ships. There is even a human sect of Genestealer allies called the Genestealer Cult that want humans to worship the Tyranids. This faction is creepy, frightening, and have billions of creatures ready to fight at your disposal. Maybe not the best for a dinner date. And that is the Tyranids!

Quick Summary: Space Refuge Elves with psychic abilities. You read that right. The Eldar are one of the oldest races in the galaxy, and even fought against the Necrons millennia ago for the Old Ones. They used to be the most powerful and expanded empire in the galaxy!... until things went horribly horribly wrong. They had expanded and learned everything, and no knowledge was forbidden. When there was nothing left to do, many gave way to their most hedonistic impulses. Exotic cults sprang up across the Eldar domains that eclipsed the noble pursuits of old, each dedicated to esoteric knowledge or sensual excess. The core of the Eldar race began to look inwards, inexorably seeking new ways to explore the full range of emotion and sensation.
And with that grew a chaotic and hedonistic energy that was coalescing in the Warp. Eventually all of this energy gave birth to The Chaos God Slaanesh, the prince of darkness and hedonism. You remember him, right? (if you don't see Part 1! Link at the top!) Made in the awful image of all of the Eldar’s worst impulses, Slaanesh was the perfect disaster for the Eldar. With his creation, Slaanesh killed billions in a psychic energy wave that made all of the Eldar a Refuge people.

With so few people left, the Eldar fractured into factions:

The Craftworld Aeldari:
Elves on huge planet ships that move throughout the galaxy attempting to avoid Slaanesh by… well…. running.  They are the main set forces of the Eldar at this point, and practice mind rituals to keep themselves on the straight and narrow path to avoid temptations. When they die, they turn into soul stones that are stored on the Craftworld ships to avoid getting sucked away into the warp by Slannesh. It's pretty bleak. 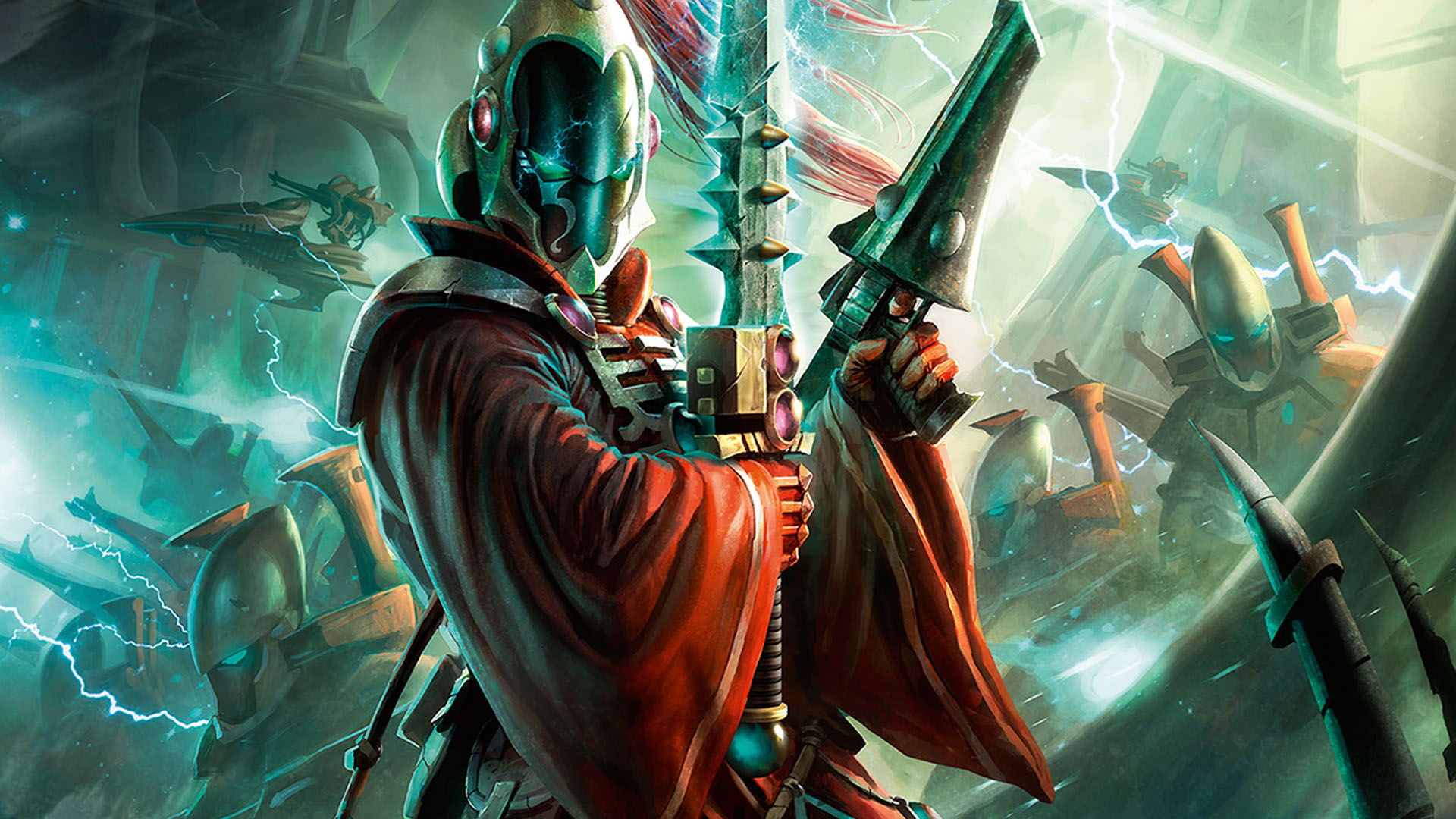 Exodites:
Despising the debauchery of their race, these Eldar left and created their own worlds of farming and self-reliance. They restarted old traditions that encouraged hard work and avoiding overindulgence.

Harlequin:
Serve the Laughing God, a god that scoffed at the psychic links and hedonism of the Eldar. Supposedly survived by hiding in a area of wormholes and extradimensional space called the Webway. He laughs at the Chaos gods and plans his revenge. His warriors and followers combine art with war. Their movements are incredible and they are a force to be reckoned with.

Dark Eldar (Drukhari):
Essentially dark elves, they fight off the Gods of Chaos by cutting off their connection to psychic abilities because this would attract Slaanesh. Instead, they The Drukhari are mainly pirates and slavers who prey on targets across the galaxy to feed their unholy appetites for other sentient beings' souls, a terrible desire called "the Thirst," though they are sometimes used as mercenaries by other star faring species.

The Drukhari are the living embodiments of all that is wanton and cruel in the Aeldari character. Highly intelligent and devious to the point of obsession, these piratical people revel in the physical and emotional pain of others, for feeding upon the psychic residue of suffering is the only way they can stave off the slow consumption by the Chaos God Slaanesh of their own souls.

Ynnari:
They follow an old god that was supposedly eaten by Slaanesh, and still practice hedonism hoping that one day their god will rise and defeat Slaanesh. They are the new kids on the block, and recruit from within the other Eldar factions.

And that is just the Aeldari, but not to worry, there are only a few more factions to worry about.

They were created by the Old Ones to fight the Necrons, and they are an extremely warlike race of people!... you know what? Its not complicated. It’s Space Orcs. It’s exactly like Fantasy Orcs, but in space. That’s it. You’re welcome.

…Still here? Okay, fine. Orks grow from spores, which are impossible to destroy once placed on a planet. so if you are fighting Orks, you've already lost in the long run. they grow into warlike creatures with a powerful herd psychic energy. If a group of Orks believes something, they will it into being real. So if they collectively think a actual scrap pile is a flyable warship, it now is. pretty cool huh? They fight a lot internally, and will always follow the biggest Ork around.

Alrighty. You’ve come to the end. Are you ready? The T'au are best described as Blue people who are Warhammer's version of Star Trek's Federation. The T’au are a relatively new race, focusing on technology to push them forward. They strive towards The Greater Good, the peaceful coexistence of ideas and unity among races. Naturally, the rest of the universe hates this. The T’au strive to bring all races and people into the fold of their empire, and will often ask races to join of their own accord before resorting to any violence.  They command mechs, and state-of-the-art weaponry to spread their military and idealism across the universe. Their systems of government are split into a caste system mirroring elements like Fire and Water. And with that, you have come to the end of this summary! It still took a while, but we made it! I recommend exploring the forums based around Warhammer 40k at https://warhammer40k.fandom.com/wiki/Warhammer_40k_Wiki. Thank you for taking the time to read this over, and I hope it has been helpful for you! Now go out there and explore the UNIVERSE!

For more information, check out Games Workshop at https://www.games-workshop.com/en-US/Home and for all your gaming needs keep it right here at www. capefeargames.com