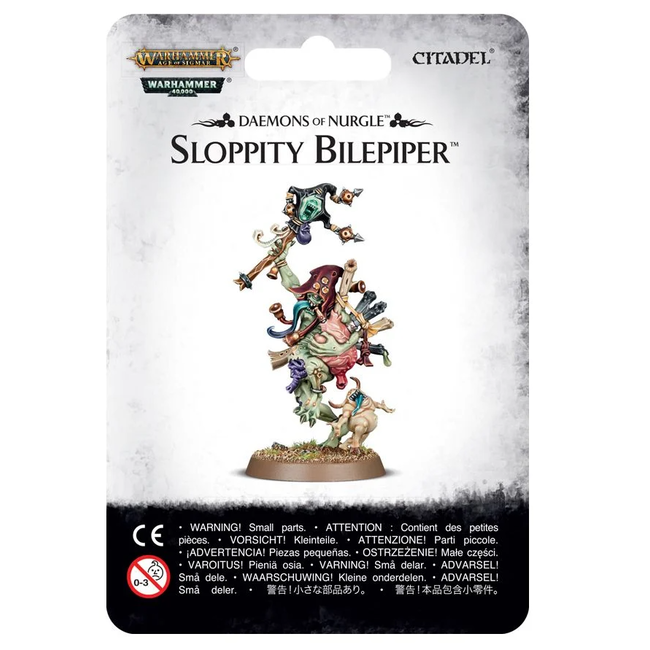 This multi-part plastic kit contains the components necessary to assemble a Sloppity Bilepiper. Surprisingly lithe and cheerful, he is posed in a somewhat capering manner, holding his marotter aloft and his gutpipes in the crook of his arm. The marotter is a strange weapon, essentially a big stick with a Plaguebearers head stuck on the end, clad in a jester’s cap with spiked censers at the end of each of the three flaps. The gutpipes are another thing entirely – a large, miscellaneous organ with a bunch of ramshackle valves and pipes jammed into it, tied together with bits of rag and leather. The Bilepiper himself features jolly bells tied to his ankles and wrists, an icon-adorned hood and a split in his pot belly through which his guts dangle hilariously. A Nurgling is included, which can be placed at the Bilepiper’s feet, dancing joyously along to the wheezing and groaning noises issued from the sphincters of his gutpipes.

The Sloppity Bilepiper comes as 9 components, and is supplied with a Citadel 32mm Round base. This model can be added to Warhammer Age of Sigmar and Warhammer 40,000 armies.

This multi-part plastic kit contains the components necessary to assemble a Sloppity Bilepiper.